Here are the Valkyrie magazine articles and reviews I’ve written. I’ve not included any game statistic in the articles or articles that were specific to particular games at the moment. I’ll add these later once I’ve checked the copyright position of the companies concerned if allowed.

A review of AEG’s swashbuckling adventure game which appeared in Valkyrie issue 18. While I’ve written a few reviews for Valkyrie and for Ragnarok this one is special because it got my foot in the door at Valkyrie when the reviewer who was supposed to be writing it pulled out with only a few days to go before the issue was due to go to press.

A new fighting school for Feng Shui.  My tongue was planted firmly in my cheek when I wrote this.  From Valkyrie issue 19. 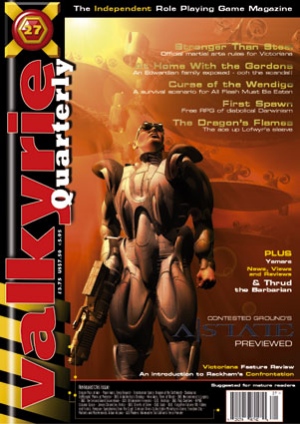 When a Door Isn’t Just a Door

A retrospective look at the door in role playing games.  This article from Valkyrie issue 20 was possibly the hardest work of any of the articles I wrote for Valkyrie.  After a half dozen or so drafts it just wasn’t working so it was pretty much written again from scratch.  It was worth the hard work in the end when coming back from GenCon UK a group down the carriage were laughing their heads off sharing the jokes.

This scenario for 7th Sea appeared in Valkyrie issue 21 written before I knew that AEG were planning the Freiburg Box set.

You’re Only Supposed to Blow the Bloody Doors Off!!!

Heist themed gaming advice from “The League of Gentlemen” to “Resevoir Dogs”  that appeared in issue 25.

The Way of the Chocolate Ninja

Way of the Chocolate Ninja

At Home with the Gordons

The people and architecture of a grand Edwardian home. From Valkyrie 27.

Characters on the Couch

A practical Jungian approach to role playing game characters which appeared in Valkyrie 28.