The Woman in Black Notes for Roleplayers

This was originally part of my review of the Woman in Black.

If I was going to run something inspired by The Woman in Black as a roleplaying game I’d probably use it as a scenario for D&amp;D Ravenloft, Trail of Cthulhu with Shadow over Filmland or a Victorian age mortals World of Darkness game.  If you want to turn it on its head you could use it in a game of Lost Souls with the PCs taking the roles of ghostly children.

The majority of the story takes place in an isolated Northumberland coastal town.  It’s a backwater with a post office, grocers, a single public house with a few rooms for paying guests and a solicitors.  The Daily’s, the richest couple in the town, have the only car while other residents use horse-drawn vehicles.  The date of the events in the film is sometime in the late early 20th century judging by the relatively new Rolls Royce Silver Ghost Mr Daily drives. Electricity hasn’t reached the town yet.  The only communication with the outside world is by post or telegraph – there are no telephones in town.  Its two changes on train from London.  The railway station is some way from the town and is on a small branch line with a limited service. 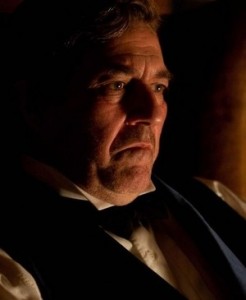 The locals are hostile and suspicious of strangers especially anyone planning on going to the island.  Whenever someone even glimpses the Lady in Black a child dies in a terrible accident.  The locals are over protective of their children and hide them from strangers.  Player Characters can expect a very unfriendly welcome.

Across a causeway open only at low tide from the town on an island stands a classic haunted house.  Its overgrown grounds include a small graveyard.  The house itself is run down and full of junk.  There are stuffed animals, broken furniture, clockwork toys and old oil paintings on the wall.

Within the houses walls is hidden the evidence of a dark family secret.  A woman declared insane.  A child adopted and isolated from his natural mother.  A tragic death with the body never found.  A suicide.

The titular Woman in Black is a ghost associated with the death of children.  She’s out for revenge on the town and kills children by possessing them before forcing them to kill themselves.  Ghosts of the children she has killed manifest on the island and sometimes in other places.  The ghost of her son manifests but not at the same time as she does so they don’t meet.

The children can communicate through possession of Daily’s wife.  They can speak through her but are more likely to use her to draw crude images by scratching surfaces with sharp objects.

Key to PCs solving the mystery are:

The player characters and their loved ones are threatened by accidental death resulting from the Lady in Black’s possession of children.  Their sanity is challenged by the effects of her haunting.

In addition to possessing children The Lady in Black can visually manifest and scream although she never speaks.  She can affect objects including locking and unlocking doors in the house, affect clockwork toys causing them to work without being wound and affect other objects including a rocking chair.  At least once she cause an impenetrable darkness to appear behind her.

The Ghost of her son can visually manifest on the causeway, the island and in the house.  He can leave a trail of muddy footprints.

The other ghosts appear to be able to visually manifest and possess Mrs Daily.

The haunting can be ended by finding the information about what has gone on.  This allows the PCs to search the marsh for the body lost in the mud near the cross marking the rough location of the son’s death.  Placing the cards sent by the woman in black with the body and winding the toys in his room will summon the lady and lay her to rest.  She and the other ghosts may not go immediately to their grave.