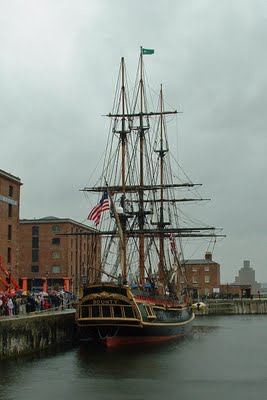 I had a less leisurely start to Saturday as I did a mad dash for my food shopping so I could get down to the Albert Dock in Liverpool to see the Bounty II, an oversized replica of the original HMAV Bounty which was making a one day stop to raise funds for the restoration of the Cutty Sark. Despite continuous heavy rain the crowds to see the ship while I were there were large including many children in pirate outfits drawn by the ship’s appearance in the Pirates of the Caribbean films. I decided not to go aboard because of the long queue and the inclement weather but did get some good photographs of the ship from.

Good photo. I can almost see Mr Christian standing up in the lifeboat with "Rule Britannia" playing, as he leaves under orders to shag the chieftan's daughter.