Proof of the Decline of Gaming 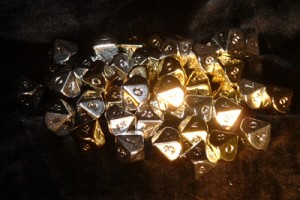 I’ve heard a lot about the decline of gaming (or to be a bit more focused RPGs) in 2010.  I’ve just read the final, ultimate, absolute proof that gaming isn’t what it used to be.  The reports of the theft of 1,753 cards with a value of just under $45,000 from WotC demonstrate the depths the hobby has sunk to.

First the plan sounds far too simple.  Take some cards and sell them at a WotC event and hope no one notices?  Please we used to have standards.  Did he critically fail his plan amazing robbery roll? See that’s the problem with turning a role-playing game into a mass of combat mechanics inspired by MMOs. Its all 4th Editions fault.

Gamers these days don’t knows how to spend an eighteen hour gaming session planning a dungeon crawl heist only to have the plan fall apart within minutes of actually taking action. Clearly the whole thing wasn’t old school enough. We all know it only really works with a group of at least eight involved to pull off a proper dungeon crawl caper. There were only (allegedly) two people involved. The whole plan was clearly way (and I really wish I could type that so I can put the emphasis on way I want to) too simple. Steal cards then sell them? Please!

Secondly surely WotC have better traps in place to protect their rare treasure.  How did he get past red dragon in the courtyard, the goblins in the foyer (and their a cave troll help), the spiked pit in the corridor, the poison gas on the store room door and the Tarrasque squashed into the 10′ by 10′ anti-chamber? Even if he got past those surely the fiendishly complex, time locked, unpickable, anti-magic, trapped, safe door should have stopped him getting any cards? He didn’t just do it once he did it 70 times.

One encounter with a Tarrasque each decade I’ve been role-playing has been more than enough for me.