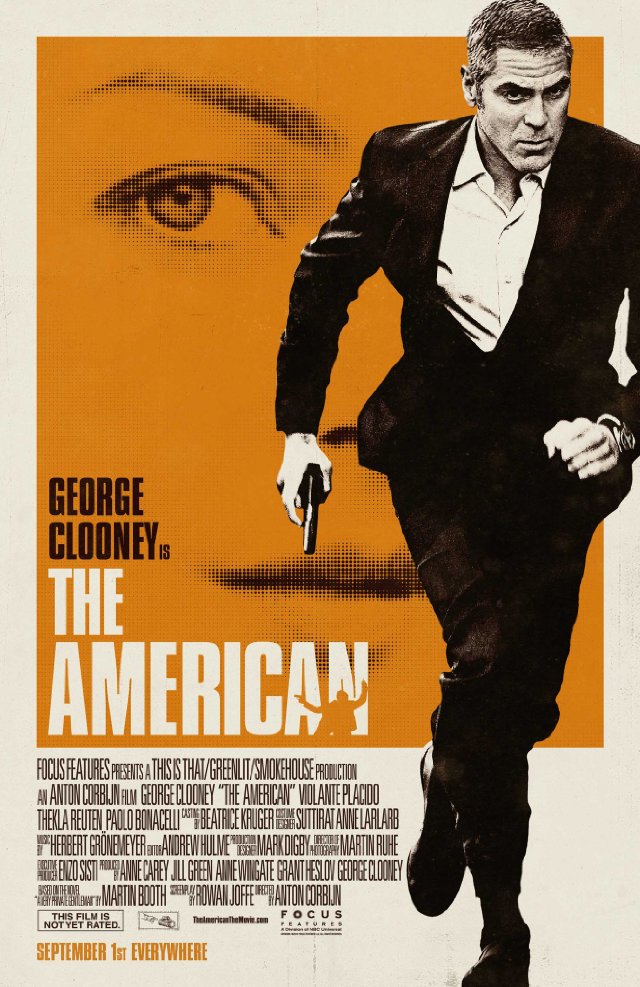 The American is probably the slowest film I’ve seen in a long time – it’s certainly the slowest thriller I’ve seen for several years.  Personally I really liked how slow it was but, as was the case for the friend I went to see it with, it could be too slow for many.

George Clooney’s Jack / Edward has to carry the vast majority of the screen time.  He’s in virtually every shot other than the wide shots of the landscape.  There were long sequences without words, sequences of him assembling a gun, sequences of him travelling alone.  He has to convey his character’s emotion through reactions, body language and expressions. Fortunately he keeps his acting subtle and doesn’t resort to gurning.

One thing the film did very well was to develop his paranoia.  Several times things happen that in an action film would kick off another action sequence.  Many turn out to be quite trivial.  In The American they just heighten the tension.  The action when they came I thought they were well executed.

While twisty the plot isn’t overly complicated and while in some ways clichéd – man goes to hide and meets a priest and love interests meanwhile he is hunted by bad guys and haunted by his past.  However it veers away from the clichés following its own path.

The scenery is beautiful and beautifully shot. I have to confess there were a couple of shots where my reaction was to wonder if they’d used some CG to enhance the appearance of the scene.  I hope they didn’t but if they did it was fantastically subtle work.

I’d like to have seen more of Paolo Bonacelli, Father Benedetto. The one moment he did was very effective a scene or two more like that could have been very effective .  Violante Placido’s Clara might have had a little more screen time to flesh out her character – given her repeat nudity I can’t really say we needed to see more of her.  Some of the other local characters could have been given a little more air to breathe too.  It wouldn’t need to have become Local Hero with a hitman in Italy but it could have been something more.

The American leans heavily into being an old school Euro Thriller.  The Sergio Leone reference is a definite hints towards the films future.  There are also elements of classic European films like Du rififi chez les hommes.

The American isn’t going to be everyone’s taste.  I enjoyed it because it dares to slowly unfold the action and build tension.  I can understand it disappointing anyone who wanted it to get going quicker and spend more time on characters other than Clooney’s or who’d mistaken it for an action film from the trailer.