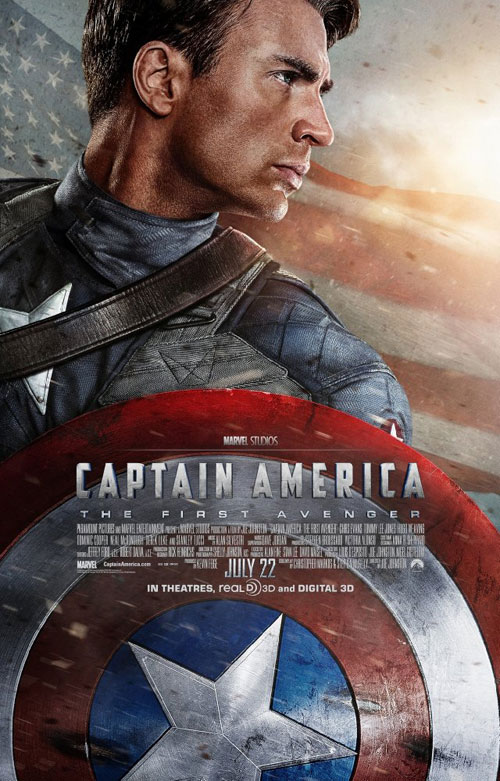 Captain America: The First Avenger tonight.  Really enjoyed it.  I’m starting to think that (after X-Men First Class and The Watchmen) I prefer my super hero movies with period settings rather than modern day.

Plot wise it’s a bit formulaic.   As with a lot of super hero films it shows us Captain America before powers, gives us the back story on getting the powers and then moves to the using the powers.  Along the way some of the inevitable tropes get played out – he loses people close to him, he messes up getting the girl and he has a standoff with the villain.

The costumes, sets, graphics and most of the design have a really strong 1940s feels to them.   I did find some of the design of Hydra’s vehicles and equipment a little jarring.  Some through its size and some because it had an aesthetic that felt more post 1960 than World War II.

One aspect I really enjoyed was the way the sound track built through the film.  Early on, before Captain America became a super hero, it had a strong Saving Private Ryan / Band of Brothers vibe that was very John Williams / Michael Kamen.  When Steve Rogers truely takes on the persona of Captain America the score moved from the traditional straight war movie theme towards something more in tune with a men on a mission film like Where Eagles Dare / The Dirty Dozen riff – still with a heavier military feel but bigger brassier and with more percussion.

One thing I did find interesting was the number of people who sat through the credits to see the teaser for The Avengers.  I’d say almost half of a pretty full cinema waited right to the end for the brief glimpse of the next part of the series.

So overall I thought Captain America: The First Avenger  an enjoyable, by the book, popcorn, superhero movie.

Enjoyed the movie, the romance, action, and Rogers' earnest personality! Evans was HOTTTTT, cant wait for the sequel. I wish they make a sequel just for this film, and not for all the marvel heroes.

The vehicle designs could have been even more incongruous - we almost drove onto the Captain America set by accident when they were filming in Stanley Dock! Hopefully the Hydras vehicles weren't based on a family size VW :)