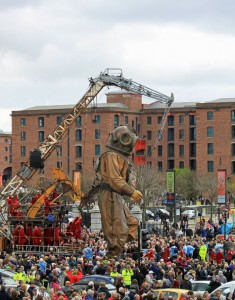 Took a late lunch today and went down to the Albert Dock in Liverpool to see the emergence of Uncle which is one of the giant figures performing throughout the city as part of Sea Odyssey this weekend.  Took over 300 photographs in less than 45 minutes and reducing them down to a few to post is a bit much of a task for a Friday night.