Characters on the Couch (Part 2)

Following on from: Characters on the Couch (Part 1).

Each of the archetypes is associated with one of the drivers giving a general impression of what they want to do.

The key drivers that Jung identified were stability, mastery, belonging and independence. Modern discussions sometimes refer to stability as “providing structure”, mastery as “thumb print on the world”, belonging as “no one can be an island” and independence as “the yearning for paradise”.

Mastery drives us to be innovators, to create knowledge, to be unique and to have an impact on the world. Stability drives us to provide structure to our lives and to blend in. Stability and mastery oppose each other.

The inner conflict between the different drivers creates tension within an individual. These tensions can be used when creating characters to make them dynamic living entities. It can also create tension and conflict between characters whose drivers are opposed. 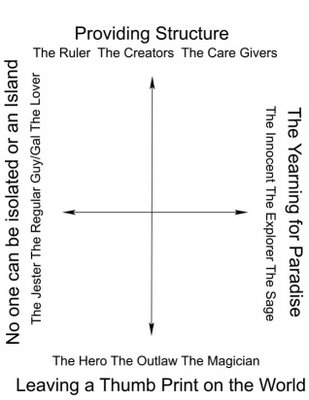 In Campbell’s approach the Shadow is one of the archetypes a character encounters on their journey. When using this technique, however, every archetype has a shadow form. An archetype’s shadow is a version of the archetype taken to its extreme. Sometimes they are without a moral compass to guide their actions, some are mentally ill, some just don’t know when to stop, some don’t know how to say no or they work for the enemy and believe in their cause. A character may be lured by the shadow or struggle with their conscience as they veer towards becoming the shadow and some are redeemed after becoming the shadow.

Next Part: Characters on the Couch (Part 3).

×
Some Blogs while Hiding from the Sun
Vue News Blog