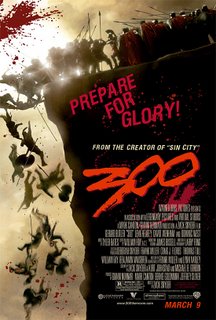 a couple of days ago. I enjoyed it and was surprised because it was less styalised than I’d expected from some of the reviews I’d read. It’s success shows Gladiator

wasn’t a one off revival of the epic. I did find it a little uncomfortable in places with the violence a little too graphic and pretty at the same time. I could analyse it in depth but instead I’ll refer you to John Rogers instead since he’s done a far more in depth write up than I would.