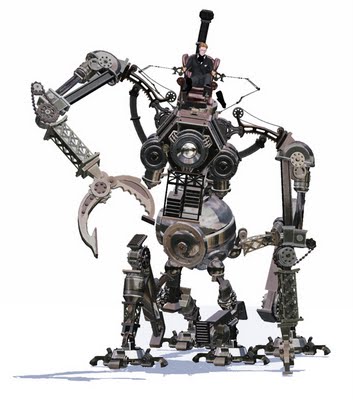 Here, by popular demand, is a bigger version of the picture that is on the cover of Rag issue 52. I’m a bit embarrassed by it because it was a test that was thrown together in about 20 minutes using Poser 7

and Vue 6 Infinite (although this one could have been made is Vue 6 Easel just as easily). It uses a few models from Daz including Steam-Mech and Michael 3 (with a few morphs to shape his head who is wearing the 19th Century Suit Pack. Since I was expecting it to be used as an interior illustration in black and white I only used simple solid coloured textures on Michael and his clothes instead of more detailed texture maps.

Thanks guys. My Wordless Wednesday this week will be one of the interior illustrations from the same issue that took some effort. Hope you'll like it.

Yay - i'm a popular demand! Thnx for loading larger version - i think it looks incredible. don't mind me while i bow and scrape in awe.