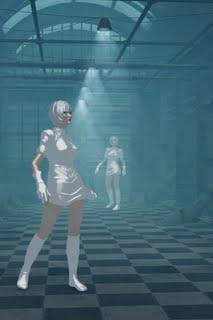 I got a sneak peak at Brady Mac’s new Toon shading tutorial for Poser and Vue this week. It’s a very simple and effective way of bringing the two applications together to produce a different type of image. The picture above is the first one I made following the tutorial after a few quick test pictures to see how it worked. I’ve used Daz’s Aiko 3 and Stonemason’s The Ministry. Aiko was textured in Poser and brought into Vue following Brady’s tutorial. The Ministry and Aiko were both lit in Vue using eight spot lights. I used the Interior atmosphere that ships with Vue 6. Rendering of the final image took about two hours and I then did a few minor retouches to correct a minor problem with spill from one of the lights. I did no retouching of the figures at all.

One Response to Cell Shading Tutorial from Brady Mac

Thanks for testing my tut, Mark. And thanks for posting about it. Cool image. :) :)