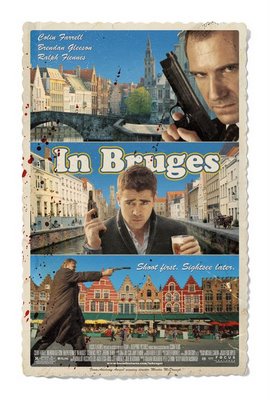 In the way that dark chocolate became a lot darker a few years ago In Bruges takes dark comedy gangster films and makes them a lot darker. Its an action thriller with little action. An 18 film that definitly deserves its certificate without being gratuitous. A film which isn’t what you’d expect but certainly doesn’t disapoint for it. A comedy where the audience isn’t certain when thet are supposed to laugh.

Where Tarantino would cut the camera away just before Martin McDonagh holds a shot on the repercussion of violence till its uncomfortable. This isn’t a film that glorifies hit men but it does paint them as humans. Nasty vicious men but still human.

Imagine pulp fiction stripped back to the two hit men, a couple of well drawn supporting characters and Marsellus. This is, from the start, a film of 107 minutes which mostly consists of a few characters talking. Often they are spouting rubbish but its well written, well delivered interesting rubbish.

Oh and Colin Farrell turned up with his acting hat on for the first film I’ve seen him in since Tigerland. Now if someone can remind Vin Diesel to do the same…