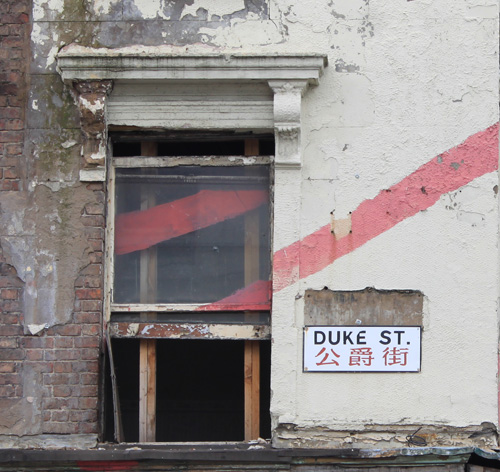 This Wordless Wednesday’s a day late because of the Burke and Hare post.

Most of the pictures I post on my blog of Liverpool are of interesting buildings that are reasonably well looked after.  Having lived here for nearly twenty years I’ve seen a lot of miss-representation of the city in the national media.  I’ve heard comedians tell jokes this year that were about Liverpool before I arrived.    Its like a film crew that came to Liverpool and hunted down a street that’s about to be demolished or  the one who filmed the streets on bin day in one of the few streets that doesn’t have wheelie bins so they could shoot all the bin bags on the street.

I’ve watched Liverpool rebuild itself and restore its architectural heritage.  I don’t want to focus on the derelict and run down buildings any city has.  However some broken down buildings are interesting (and not just the Rotating Yates’s Wine Lodge).

They can have texture and character that other buildings have yet to gain. Water running off architectural details can create interesting patterns. Materials can age in intriguing ways.  Along with the photos I usually post I often snap side streets, alleys, buildings under construction, boarded up buildings and derelict shells.  I’ll live with the funny looks and one time someone complaining about “damn tourists”.

This building on Duke Street shows several layers of its construction, like an actor removing his face paint.