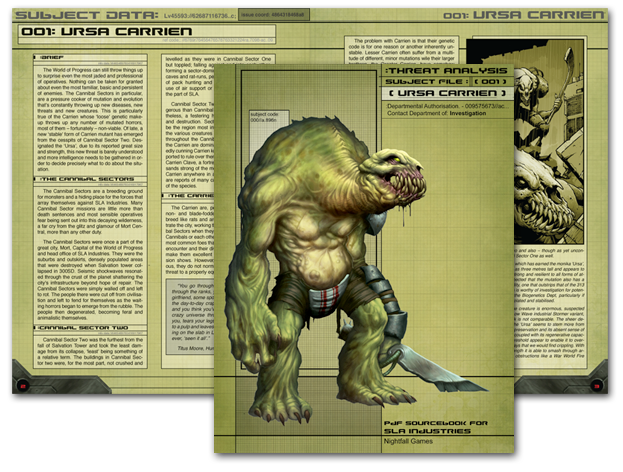 Ursa Carrien is the first release from Nightfall Games of a pure PDF product. At 98p it’s an eight page bargain for anyone who plays SLA Industries RPG.

The Ursa Carrien are a new addition to the monstrous inhabitants of Cannibal Sector Two and the opening illustration by Dave Allsop is a stunning piece of work. After the cover page there is a one and a bit page description of the new Carrien for players and GMs. The rest of the PDF is GM only including statistics for these new creatures, the weapons they use and a BPN “Armed for Bear”.

These evolved, smarter, weapon carrying Carrien are spreading – supplanting Greater Carrien that they encounter. They will provide a new and interesting challenge for players and are an excellent addition to the game.

GM’s will find the material useful. The Ursa Carrien’s behaviour, combat style, life cycle and relations with other Cannibal Sector inhabitants are fleshed out. The BPN is well thought out and nicely focused on the Ursa Carrien. They feel located in the game universe not just a random addition. It’s good to get a chance to see how Nightfall themselves set up a straightforward BPN.

I do have a few quibbles and I’m going to go into more detail than I normally would because Jared has asked for feedback on their first PDF. The first four are all so minor that I’d not normally mention them:

The only real concern I have comes from the very high levels of production value that have gone into the design of the PDF. The use of an olive green background is great when viewed on screen but is a disadvantage when printed on a home printer. While my laser printer produces a very nice copy I can only imagine the wrinkled, wet pages my old ink jet would have produced as it chewed up two out of three colours in the colour cartridge. A more printer friendly background or a printer friendly version would be nice.

Ursa Carrien is an extremely polished, professional offering and I look forward to seeing what else Nightfall releases in the future. None of the really minor issues none of should stop SLA Industries GMs from finding the £0.98 ($1.49) from picking a copy up.