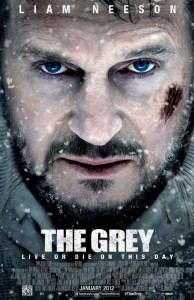 Its BAFTA weekend and I’m not expecting The Grey to be getting any nominations other than for film shot in the coldest location (and Tinker, Tailor, Soldier, Spy may beat it in that category too).  As is pretty obvious from the poster above it’s another Liam Neeson vehicle trying to find the ingredient that he brought to Taken a few years ago.

The plot is pretty straight forward: a plane loaded with workers from an Alaskan oil drilling operation crash in the wild.  Those that survive are threatened by the weather, lack of food, lack of medicine and hostile terrain.  Driving them is a belief that no one is coming looking for them and a hungry pack of wolves.  Holding them back are their personal demons and internal disputes.

The story is interspersed with flash backs to Neeson’s Ottway in what appear, at least at first, to be happier times.  This little sub plot is somewhat laboured.  I can understand what it was trying to achieve often interrupted the more visceral conflict between the group of crash survivors.  Maybe if, like the lads sat behind me in the cinema I’d not spotted where it was going, earlier in the film it would have provided a more interesting twist in the sub plot to set up the last scene of the film.

Overall for me this is a relatively fun, reasonably acted survival horror film but not a personal classic.

However The Grey is eminently suitable for any Game Master looking for ideas for a survival horror role playing adventure.  The five key elements I’d consider using are:

Let’s tackle these in order…

The characters in The Grey are all hardy oil workers, some have served time in prison but they aren’t ex-soldiers or survival experts.  There certainly aren’t any ex-special forces or super heroes here.  No man nips round the back of the plane to change into his spandex costume and fly off to fetch rescuers.

Once the plane crashes they have no outside help.  Mobile phone doesn’t work, the wrist transponder doesn’t summon rescuers and they see no rescue planes and barely any signs that humanity has touched the wilderness.  They are on their own.  If you don’t include any NPCs then your PCs will only have each other to interact with.  You could try insisting that once that is the case that they should discuss everything in character.

They only have what they can scrounge from the crash and later their surroundings.  At no point do they have medical kits, survival rations, firearms, improvised bombs, rope, survival gear, satellite phones or a host of other stuff that would have given them more of a chance and less of a challenge.  From memory the resources they have include:

If I were using The Grey as the basis for an adventure I’d follow its lead and keep resource sparse.  Make a list before you start of things they can find or have with them.  Don’t let your players start expanding the list in play.  Remember role players will probably make a better job of improvising weapons.  This group lacked the sense to attach knives to the end of long sticks to make better spears.  While I’d not normally count every shotgun shell used or every alcohol miniature drunk in a game keeping track of their resources could be an essential part of a survival horror game.

As in many survival horror films the weather and environment are both dangerous and unpredictable characters as deadly to any character as hostile forces.  Here blizzards swallowed them, the cold sapped them, hypoxia slowly strangled the life from them, lighter snow limited their ability to see, deep snow hampered their movement, hidden drops tumbled them, fierce rivers drowned them, drops killed them and darkness left them vulnerable to surprise.

Finally there are the hostile forces hunting them.  In The Grey that takes the form of a pack of wolves with an Alpha male, the pack and loner Omega that can be thrown against the group to test their resolve.  Changing the nature of the hostile force would change the nature of the adventure.  For example a lone alien like that in Predator can’t flank or outnumber its victims like the wolves but doesn’t have to get into close quarters to kill.  A group of human hunters could have any equipment they are carrying taken and turned against them as Officer John McClane turns Hans Gruber’s gangs weapons against them in Die Hard.

With a little work The Grey includes elements that could be incorporated into a wide variety of games: