I quite often make maps and other diagrams for games I’m running using Vue and other computer graphic software.  Over the weekend I was messing around with GeoControl2 and it randomly produced a landscape I quite liked the look of but I don’t have a game it fits with at the moment.   So I thought I’d post it here for anyone who might find it useful for the game they’re running.

The maps represent an area of hilly upland terrain with several large lakes connected by rivers. The map covers an area 22.5km on each side.

In absolute measurement the lowest points on the model at around 430m above sea level and the peaks at 2500m. However relief models are often scaled vertically to show features more clearly. If you take each contour line as being 10m and start with 430m for the lowest point the terrain’s peaks are around 770m. 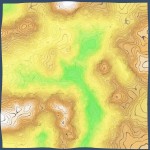 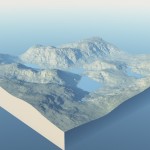 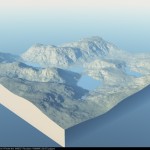 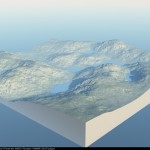 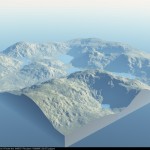 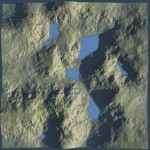 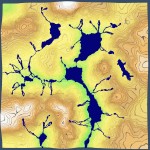 Hopefully this will be useful to someone for their game – I’ve already had ideas for using it with D&D and Call of Cthulhu.  I’d love to know if you use it or what you think about it…