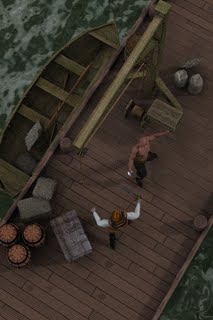 I ment to post this explanation night but I was really tired so I had an early night and couldn’t get to sleep till well past 2AM. Anyway less of my problems you didn’t come here to hear me moan on…

The picture I posted last week for Wordless Wednesday, Duel 2 that several people said looked like a computer game was made using Poser and Vue. It was a rework of an earlier picture of mine, Duel. I decided to change the angle a little so rather than looking at the characters with a conventional photographic angle I’d look down on them from above. I also removed a lot of the objects that were already in the scene as they wouldn’t be visible with a steep downward looking angle on the scene but would be using precious computing resources.

However the image was now rather plain and empty with only a couple of characters on the dock in view so I added some clutter to make the setting more interesting. I also changed the water so it was more dramatic although I think it could still do with some more work. I also used SkinVue to try to improve the character’s look although I’m not certain it really made a lot of difference to this picture, if I improve the lighting it will probably have been worth the effort. I fiddled with the light a bit because the original lighting cast shadows that hid some of the detail in the picture. I may play with the lighting on this one again as I’m not really happy with it yet. Finally I rendered it and posted it here.

The following products were used in making the picture: