Dirk Dangerous and the Giant Balls of Doom – Away 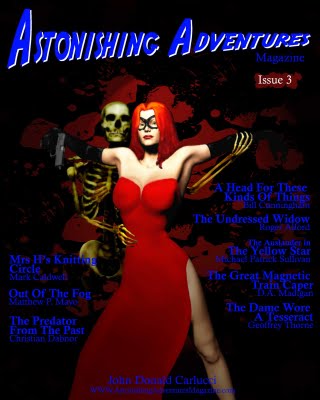 I’ve sent Dirk Dangerous and the Giant Balls of Doom off to Astonishing Adventures Magazine last night. Glad I gave it one last proof read because some little graphics had crept in to the file. I think they were Word 2007 editing markup converted to graphics by switching to old style doc format but I could be completely wrong.

Issue 3 of AAM has been out for a little while now and features another of my stories in this somewhat erratically focused series: Mrs H’s Knitting Circle. There is a small mistake in the issue: Mrs H’s begins with "The sap felt good in my hand." not the sentence before that which is from the end of the previous story so don’t get confused by the opening.

I’ve been putting some more work in on the Dirk Dangerous web site. It won’t be ready for at least a geological era but it is at least moving someway towards launch even if its at the speed of tectonic plate movement.

I’ve also got a structure for the next story in the series. Story five, tentativelly titled Meanwhile… will jump around between the various ongoing threads of the plots revealed so far tangling them up and bringing the various elements of the story together.

×
Liverpool One
Dirk Dangerous and the Giant Balls of Doom: Away