The Customer is Always Wrong… 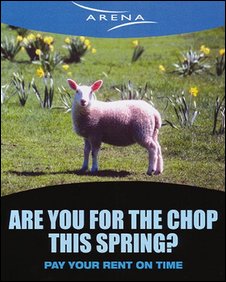 at least if their a tennant. The picture is of a leaflet sent out by Arena Housing and they have now apologised (see the BBC for more details). Last year another Liverpool landlord put notices on the house of tennants who they say hadn’t paid their rent. A growing number of tennants are being evicted or forced to move because while we have to go through credit checks and put down deposits a property owners word is their bond as far as estate agents are concerned. I got a letter a few weeks ago from the agency I rent through which started out with a threatening tone and carried on that way implying legal threats even though it was they who were at risk of breaking the law and their contractors who had failed to contact me using any of the three phone numbers, email or by sending a letter.

Don’t get me wrong I understand that there are bad tennants. Ones who don’t pay their rent or who wreck a property. I’ve seen a flat where there were footprints on the walls from floor to six feet off the ground. Not just a few but enough to leave you wondering. I’ve also been shown a house that was being let that the landlord couldn’t figure out why he couldn’t let even though one room had a ceiling covered solid in fungi. A friend of mine was charged by their landlord after moving for batteries for the smoke alarm – a smoke alarm they had fitted themselves saving the landlord from breaking the law.

Getting back to my original point – are there really many businesses where customers paying thousands of pounds each year are treated with such utter contempt?

×
Lego's Business Cards
The Dangers of Turning the Page too Fast