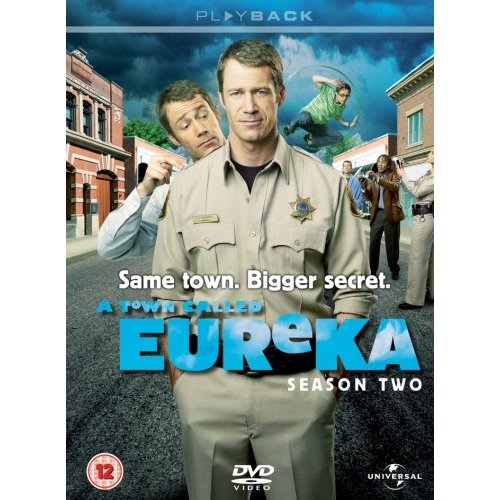 I finished watching Season 2 of A Town Called Eureka tonight. I like TV shows about quirky communities. A Town Called Eureka is an excellent addition to the likes of Twin Peaks, Northern Exposure, the first season of The League of Gentlemen and Trumpton. Each uses an outsider as a way into the strange place: Special Agent Dale Cooper, Joel Fleischman, Benjamin Denton and Brian Cant. Eureka has Jack Carter a U.S. Marshal who arrives in the town by accident. Twin peaks has its murder, Northern Exposure has oddness, The League of Gentlemen has its dark goings on and Trumpton has its musical box. It’s not a huge spoiler to reveal that Eureka has the largest collection of geniuses anywhere on the planet with budgets for all sorts of things to go horribly wrong.

By season two he is settled into town and the main characters have been established. The actors or possibly it’s the writers who are more comfortable with the characters. The inclusion of Joe Morton (Terminator 2) and Matt Frewer (Max Headroom) gives the show a certain ambiance without resorting to some of the more often used guest actors who might be brought in to add geek appeal. The large number of recurring characters gives the town the feel of a real place with real lives at risk when things threaten to go horribly wrong.

Season 2 has more of a story line connecting the episodes. It sticks to a style of story telling I like as there is no recourse to endings that come out of nowhere supported by a bit of technobable. Stories tend to misdirect both the characters and the audience before revealing how pieces already revealed fit together. Personally I find that a lot more satisfying than, say, some Doctor Who episodes. Not that Eureka is above technobable or extrapolated science but its a comedy not a documentary.

I’m not going to risk spoilling a series which relies on the viewer being a visitor to a strange place by going into anymore detail.   Highly recommended for anyone who like comedy science fiction but if you’ve not seen Season 1 watch that first.

×
Snowfall 2 – The Return of the White Stuff
Pancetta, Chorizo and Broad Bean Risotto