The Danger of Difficulty Despair – With Graphs

I was going through some very old gaming files from when I was at college and came across some notes on designing the difficulty of encounters in a tabletop role playing game. A few weeks ago I questioned if Role Playing Games Need XP and the notes reminded me that in a game with experience the characters can effectively not develop. That sounds like a contradiction but it can happen and it can be a problem. It happens when the difficulty faced by characters increases at the same rate as the characters improve and this can be frustrating for players.

In most table top RPGs experience, and character development happens between adventures characters’ capability develop something like this: 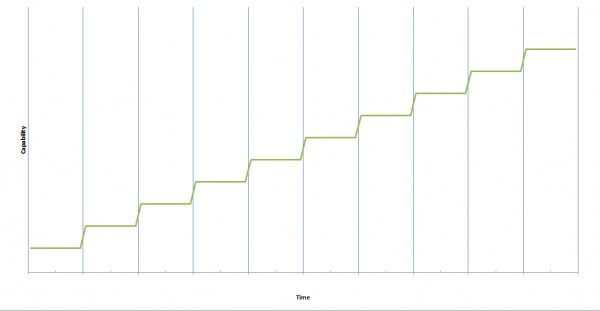 A game with linear encounter difficulty is one where as the characters abilities increase so does the difficulty of the encounters they face. The characters may gain some advantage; they may hit their enemies harder or more often and may have more hit points. Unfortunately their opponents also now hit harder, more often and have more hit points. In its purest form every encounter has the same chance of their succeeding, as the last for characters. In fact, apart from a little colour in their encounters, they might as well have not improved at all and their opponents could have remained at the same power too. 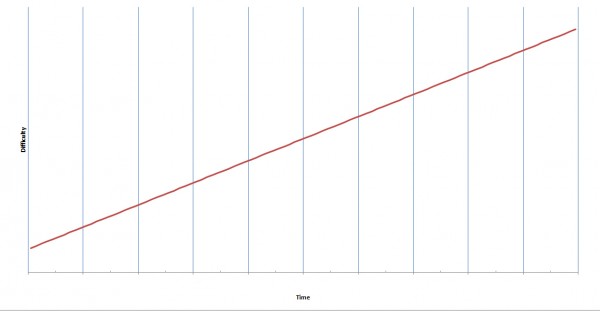 So difficulty and capability always keep step with each other… 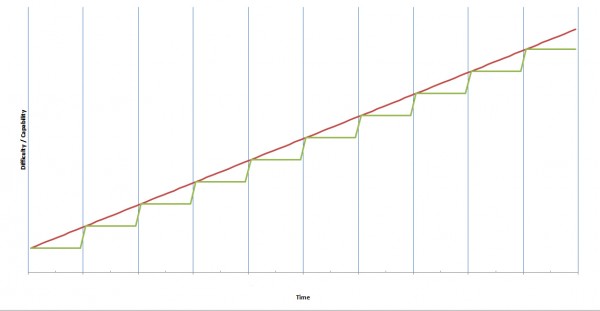 Some games virtually encourage this style of adventure design by including charts or advice to allow referees to work out the ideal encounter for a group of X players of level Y to face. Charts and tables like that serve a useful purpose in helping new referees and those unfamiliar with a game to find their feet when designing encounters. The risk of building an encounter that will obliterate a group or underwhelm them is significantly reduced without having to resort to dice fudging or deus ex machina. There is a real risk of boredom if this type of difficulty progression is slavishly applied.

Others virtually rule out easy adversaries – I read one rulebook recently (forgive me I can’t remember which one) that said all “easy” encounters where the characters were guaranteed success should be role played rather than roll played. While I agree with that generally (although I hate the phrase roll play and its derivatives) doing this all the time means the players can never feel how powerful they are in a crunchy way.

I’m going to leave this here for now but I’ll be back soon with some other kinds of difficulty progression and some thoughts on one of the worst game I ever played in.

Update: Part 2 is now available Variations on the Difficulty Theme.

×
Wordless Wednesday #33: Waterfalling
Doctor Who: The Beast Below

2 Responses to The Danger of Difficulty Despair – With Graphs

I'm not missing anything. This is the first in a series of posts, I'm starting at the begining by describing a problem which can happen in some games especially for new game masters.

While there are solutions to the problem I'm describing (some of which you mention) the number of game system features and options that can be brought in to add variety may increase but thats not true of all game systems. If the game designer followed a KIS design approach the number of options may be restricted. I'll be coming to some of the solutions in later posts: some of which don't need a more complex game system to achieve.

You are missing something about increasing power and adversary. You are not just fighting the same fights, number to number.

Higher level fights might be larger, have intricacies with zones or bursts, Feature on going effects such as weakness or other things that raise the challenge of play.

Also not only are you generally more powerful, you also have more options. Proper use of these options is key.

This could be contrasted with skill challenges, which are every bit as rigid and boring as you discuss. Higher difficulty, higher bonus and it is all a wash.