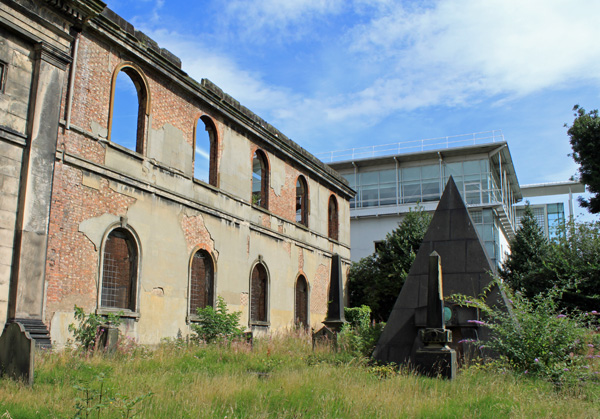 The 19th Century Church of Saint Andrew on Rodney Street is known locally as the Scotch church. It was a Presbyterian church built to serve the Scottish community of Liverpool. The church was closed in 1975 and is in an extremely poor state. In the small graveyard is a rather unusual grave in the form of a Pyramid built for William Mackenzie.  The first mystery is about his surname which is sometimes spelt  MacKenzie and McKenzie depending on who is writing about him.  I’ve gone for the name in the title of the transcription of his diaries.

A much repeated myth has sprung up surrounding Mackenzie that claims he was a gambler who was buried sitting upright in the tomb holding a winning hand of cards to cheat the devil to whom he’d promised his soul for a winning hand in a game. This appears alongside many pictures of his unusual tomb. I can’t really claim the moral high ground as I’ve played with it in an unfinished story.  However I am really intrigued as to why he really had a pyramid-shaped tomb.  I’ve done some research (ok I’ve done a bit of Googling).

Born in 1794 Mackenzie was the eldest of eleven children born in Lancashire to Alexander Mackenzie a Scottish contractor and Mary née Roberts. Apprenticed as a weaver in 1811 he switched to become a pupil of a lock carpenter on the Leeds and Liverpool Canal then later the dry dock at Troon harbour, on Craigellachie Bridge and as an agent on the Edinburgh and Glasgow Union Canal.  Later he worked under Thomas Telford and then returning to contracting on railway and canal civil engineering in Britain.  His work included the rail tunnel between Edge Hill and Lime Street Station.

From 1840 an invitation to tender for the Paris to Rouen railway by Joseph Locke led to his association with Thomas Brassey. After that he worked on railway engineering in France, Spain, the Italian state, Belgium, England, Wales and Scotland.  His investments included ironworks in Wales and France, housing in Liverpool and estates in Scotland. He had offices in Paris and Liverpool.  He was married twice and had no children.  When he died in 1851 his £341,848 estate mostly went to his youngest brother.

So far the closest I’ve placed him to a pyramid is Rome which has its famous pyramid.  This doesn’t explain his pyramid tomb which is of a very specific style.  The Diary of William Mackenzie (Thomas Telford Publishing in 2000) is a full transcription of Mackenzie’s diaries.  So my next step is to borrow it from the Liverpool Library to see if it sheds any light on the mystery.

Sorry I'm not sure where you can find more other than the diary which I've never managed to get round to reading. There are a few links on the Wikipedia page that might be a start?

I am so glad to have found this out as I used to walk past it as a child daily going to pleasant st school . And always would wonder what it was as computers were not around then its a shame to have watched it slowly deter . It is so weird now I am doing research on William McKenzie at university .Can I ask were will I find any more research please

A real treasure, too bad the area is neglecting it. Should be a focal point in visiting the area. The old church a museum.

Now I just need to join the dots a bit more :-)

Thanks Kim, I was trying to remember where you said you'd see one just like it.

It looks very like the workers' pyramid outside tombs in Deir-al-Bahri. Ed and I commented when we went past it how much in size and shape it looked like the one on Rodney Street ;-)

What a shame that church is in such a state. The brickwork used to be covered with mortar but now its fallen off.

Let us know what you find out about McKenzie's pyramid.