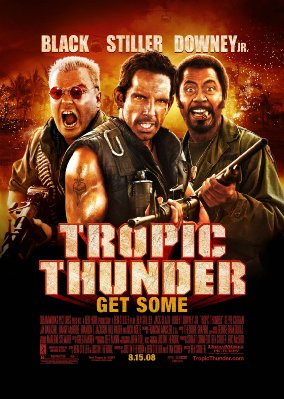 Went to see Tropic Thunder yesterday at FACT. Enjoyed it. I’d read a couple of reviews that said it was packed with too many in jokes but I didn’t think that was a problem. Stand out performances were Robert Downey Jr. and Tom Cruise. Jack Black’s role didn’t seem to work too well, partly because while a comedian like the one he’s playing might get a part in a buddy cop film they don’t tend to turn up in war movies. His character was just too thin – maybe if he’d been a "Hey its that Guy" character actor who found fame through a comedy he hated and who’d been driven to drugs by always being in the shadow of thinner actors and who resented them it might have worked.

×
Item 3 on the Agenda
Searchlight in Vue