Sherlock Holmes: A Game of Shadows

While Sherlock Holmes: A game of Shadows won’t be my favourite film of the year (Tinker, Tailor, Soldier, Spy is still the lead contender for that) it’s one of my favourite action films of the year.

One critic I saw pretty much said it was more of the same as Sherlock Holmes from 2010 as though that was almost a bad thing.  I’d say it’s a very smart move.  Its equal parts modern panto, action film and Sherlock Holmes redefined.  On a grander scale than Sherlock Holmes but without going to far over the top. 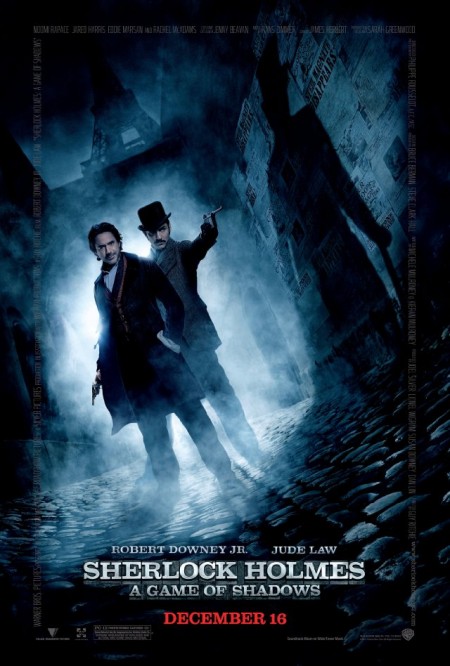 Robert Downey Jr. and Jude Law keep the repartee going and both carry the action brilliantly too.  It appears such an effortless relationship that it gives space for the Moriarty / Holmes dynamic that drives the film’s plot.

Moriarty is delicious – a truly worthy performance to complement Robert Downey Jr as a villain to equal Holmes.  He’s not at all a moustache twirler but a subtle and balanced villain.  Stephen Fry’s Mycroft Holmes is used sparingly but brilliantly especially his nude scene.   He could probably carry a Quite Interesting film all of his own.

Rachel McAdams, Noomi Rapace, Paul Anderson, Kelly Reilly, Geraldine James, Eddie Marsan and every other character down to extras playing minor villains, street life and gypsies do a great job of supporting the core cast while in many cases bringing characters only briefly on-screen to life as more than punch bags for the leads.

The sound track is excellent and uses a fiddle to add pace.  There is just enough steam punk without going too far over the top.  The visuals are excellent and the use of camera focus on expansive visual effects shots of historic cities to draw the eye is beautifully used.  The slow motion style from the first film is reused to great effect in the action sequences.

The climatic chess game is a cliché setting up to a twist on Holmes working out a fight before it happens.

Twice they don’t show us the body.  The first time we hear her fall and Moriarty tells us Irene Adler is dead but all we see is a slightly bloody handkerchief.  When Holmes sniffs it could he have detected something that will be revealed in a sequel?   And of course there is the other  body we don’t see.

So overall I really enjoyed this in fact I can’t think of anything bad to say about Sherlock Holmes: A Game of Shadows.  Great fun.

One Response to Sherlock Holmes: A Game of Shadows

Although all of the freshness that was part of the first one is somewhat over-used, the flick is still a lot of fun with Downey Jr., Harris, and Law breathing life into each of their own characters. However, I was kind of disappointed by Noomi Rapace’s role as she just simply stands there and really doesn’t do anything. Regardless though, good review. Check mine out when you can.