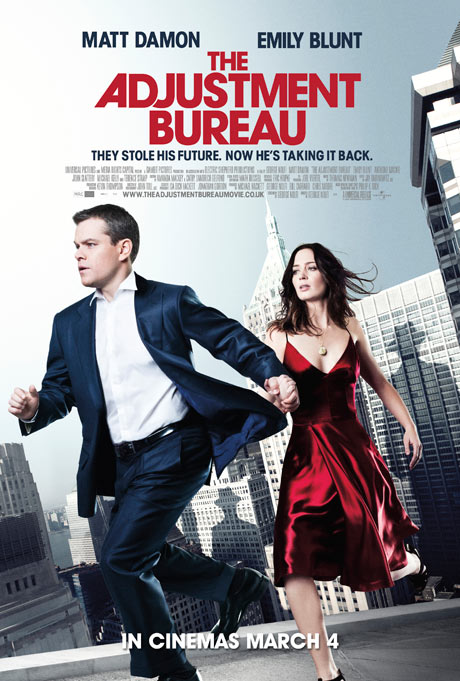 The Adjustment Bureau is an unusual suspense thriller based on the Philip K. Dick short story Adjustment Team from 1958.  It’s also not just a thriller – like last year’s Monsters it’s a romance, if it had jokes it would be a romantic comedy but instead it has supernatural / fantasy elements.

One way in which it is unusual is its speed.  It dares to be slow.  Rather than throwing action sequence after action sequence it gives us time to enjoy events unfolding.  It’s not a film afraid of dropping in a “one month later” or even a “three years later” – at times the characters are left, off-screen, to stew in their predicament.

Another unusual feature is this is an thriller without guns.  I don’t remember seeing a single gun drawn in the film.  Yet the bad guys manage to be menacing.  They’re also very stylish.  The main bad guys are all dressed in sharp 1950s style suits while the occasionally used goons wear black outfits with helmets with faceplates.

These men from the Bureau are subtle.  They are clearly powerful but rarely do anything too obvious.  They can create traffic jams, cause injuries or change the ways people think but they prefer just to make you late by making you spill your coffee.  They’re not like most film bad guys they don’t conform to the kill their own school or the out of control, man on a mission, from an agency types that populate so many films.  They are possibly the most bureaucratic bad guys I can remember. They have limits on what they’re allowed to do.  When they reach the limits of their authority they bump the job up to someone else.  Their office building is massive and like their outfits is clearly dated.  Everything is overseen by the unseen Chairman but he doesn’t appear to be omnipotent or infallible.

The cast is excellent with Matt Damon and Emily Blunt both giving solid performances in the lead roles.  The different members of the Bureau each have a separate note Anthony Mackie’s Harry Mitchell is worn out but still has a hint of idealism.  John Slattery’s Richardson is a solid company man hoping for a break to earn a promotion.  Terence Stamp’s Thompson is a high-flying trouble-shooter.

It makes a nice use of its space with a beautifully shot New York.  It jumps from tourist locations and grand vistas to downtown back streets and service rooms.

It dares not to explain everything.  Who is the Chairman?  Who are the men in 1950s garb?  It establishes that those agents of the Bureau sometimes lie.  When they hint at their long-term efforts and suggest affiliation to divine beings can we really take any of those as being truths any more than Richardson ability to guess the number or colour that Norris is thinking of?  Ultimately this is a film where the most satisfying ending is one where the threads of the two main character’s futures are left blowing in the wind.

I’ve seen comparisons to the Bourne trilogy and Inception but they are extremely unfair as it’s a different kind of film.  Where the Bourne films are action movies The Adjustment Bureau is a philosophical thriller asking big questions with bits of action.   The comparison to Inception is comparing apples and oranges – Inception is a brilliant special effects fest with some great action and philosophical musings.

I really enjoyed The Adjustment Bureau and would recommend it to anyone who enjoys a suspenseful thriller and who isn’t put off by a bit of fantasy, the supernatural or philosophical questions about free will and destiny.  My advice would be to go to see The Adjustment Bureau without paying attention to attempts to pigeon-hole it with any other films.